Today we’ll reminisce on former Valley fixture and father of “Outlaw Country,” Waylon Jennings, who would be 83 today.

Waylon in the Valley – JDs 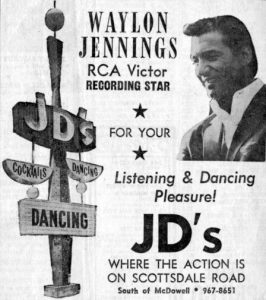 Jennings moved to Coolidge, Arizona in 1961. He and his wife eventually made their way into the Valley, and Waylon worked odd jobs while working to build his career. He was a favorite at local venues like Frankie’s Cocktail Lounge (52nd St. & Thomas) and Wild Bill’s (now Handlebar J’s on Scottsdale Rd. & Shea Blvd.) His big break, however, came when he was approached by Jim Musil to be the feature and mainstay artist of JD’s, a two-story, 3,000-person-capacity nightclub on Scottsdale Road.

JD’s had two stages: the Rock stage in the basement, and the Country stage on the main level. According to an interview with the Phoenix New Times, Musil was so impressed by Jennings that he drew up contracts that allowed, among other things, for Jennings to help design the stage and sound system. JD’s opened in the summer of 1964 and along with his rockabilly backing band “The Waylors” Jennings earned his contract playing the mainstage seven days a week from 8:40pm to closing time.

Learn more about JD’s via the video made for the Arizona Music Hall of Fame below:

A musician since his mother put a guitar in his hands at eight years old, Jennings auditioned for a spot performing on the local radio station when he was 12. By the end of his teens, Buddy Holly signed Jennings as his first artist and even performed guitar on Jennings’ first recordings, including “Jole Blon,” below. In lighthearted reciprocity, Jennings returned the favor by providing the handclaps on Holly’s song “You’re the One.”
Sadly, the budding friendship and professional relationship came to a tragic end on The Day the Music Died when Holly, Ritchie Valence, and The Big Bopper (to whom Jennings had given his seat) lost their lives in a plane crash in February 1959.
Below, find the delightful and promising early collaborations of Waylon Jennings and Buddy Holly:

Just before beginning at JD’s, Jennings signed a recording contract with Herb Alpert and Jerry Moss’s A&M records. Alpert and Moss would regularly catch shows at JDs but when the relationship soured Jennings signed with record label RCA. The singer Bobby Bare had seen Jennings at JDs as well and advocated for RCA to sign Jennings, moving him to Nashville.
Unfortunately, Jennings found the Nashville country scene restrictive and, frankly, soul-sucking. It was this tension that led Jennings to start producing his own music. In reaction to the slick productions and pop sensibilities of Nashville country, Jennings wrote songs that blended rock and folk rhythms with country instrumentation and a healthy dose of introspection. Perhaps the story here is best told by Jennings No.1 Hit: “Are You Sure Hank Done It This Way”
As a subgenre, Outlaw Country counted among its number the likes of Willie Nelson, Johnn Cash, Merle Haggard, and Jennings’ fourth wife, Jessi Colter. Below find a couple of Jennings’ Outlaw Country Hits:

Waylon Jennings: Are You Sure Hank Done It This Way

Waylon & Willie: Mamas Don’t Let Your Babies Grow Up to Be Cowboys