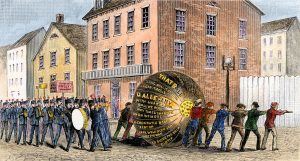 American Ethnomusicologist Anthony Seeger posits a handful of reasons that candidates used songs in their political campaigns. In the liner notes for his curated collection, Seeger notes first that there was a long history of topical and political songs from well before the US was formed, so Presidential campaigns were just one of many topics that entertained audiences around the country.

Second, he points to how useful songs are when large sectors of the population are illiterate, and most areas of the US had little access to any form of mass media before the radio in the 20s.

Thirdly, he examines the advantage that a song has over, for example, a political pamphlet by quoting turn-of-the-20th-century labor organizer and songwriter Joe Hill: “A pamphlet, no matter how good, is never read more than once, but a song is learned by heart and repeated over and over.”

How about some examples?

We thought you’d never ask! Let’s start with one of the earliest examples of a campaign song, one that highlights a common method for campaign songwriting: Taking a well-known melody and writing new lyrics to it. “Free and Fair Elections,” dating to around 1800, used the well-known tune “Yankee Doodle” as it’s basis. Hum the tune of Yankee Doodle and try to place the lyrics below in the verse and chorus melodies

Law and order be the state / With freedom and protection

All stand by the ballot box / For fair and free elections

Listen below to see how it sounds!

The tune of Yankee Doodle was so ubiquitous that it was eventually repackaged for William Henry Harrison’s campaign! Listen to the recording made by folk artist Oscar Brand below:

Another example of this is Abraham Lincoln’s use of the well-known Civil War-era song “Rosin the Beau (Bow).” New lyrics were written in the Hutchinson Republican Songster by Jesse Hutchinson, member of the Hutchinson Family Singers, one of the most popular singing groups of the 1840s. In addition to Jesse’s lyrics lauding Lincoln were three concluding verses on the abolition of slavery:

Find the original tune and the Lincoln version below!

Not all of the melody-reimaginings were purely pro-candidate, however. Some campaigns found it useful to parody well-known tunes to the detriment of their opponents. In response to the Whig Party contrasting their candidate as rural, down-home, and relatable against the “aristocratic,” Martin Van Buren, Van Buren’s campaign rewrote lyrics to the lullaby “Rockabye, Baby.” The rewrite paints the entire Whig party as drunkards and good-for-nothings:

Listen to the remarkable adaptation below: